Children squealed YES and NO in unison when Joe Gray asked if they wanted to hear his pigs squeal.  The annual Farmers Market at the Auburn Public Library featured  jams, jellies, creams, crafters, sweets and guitar playing librarian, not veggies and earth stuff like at a regular farmers market.  Little piggies running around on a blue tarp spread out in the Grand Reading Room, I was in heaven.  I was happy as a pig in shi….mud.  Cute little kids and pigs, can’t miss.   The funky chicken was a little disturbing.  Ugly as ugly gets. 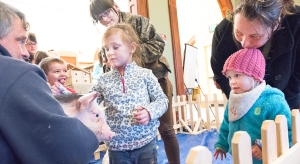 Anna Bartlett, right, 2, patiently waits with her mother Lina, to pet a 2 month old pig that Joe Gray of Valley View Farm in Auburn is holding. It was the first pig Anna had ever seen and was getting up the courage to pet her like Nevaeh Howes, 3, of Lewiston, center. The petting farm was part of Friday night’s Farmers Market at the Auburn Public Library. For more photos from the farmers market, visit sunjournal.com

I gingerly leaned over the 2 foot fence on my hands and knees.  My fancy new camera has a tilting viewfinder, so I can see what I’m shooting as I am angling the camera up from a low angle.  Andree Kehn suggested I buy this camera, and it has worked out like a charm. D750.

Earlier this week she brought me ski poles. I sent her home with her poles, but headed all the advice about helping my back get better.  You see, last Sunday I played pickle ball like a champ with some of my old friends.  I was no more sore than usual after, but when as I was walking my dog a couple hours later, I stepped off a curb just wrong and herniated a disc.  Right in front of my house.  I have been on the mend since, so when I came back to the office after the library shoot Friday night, I was greeted by an ergonomically thoughtful gesture by my cohorts at work.  All that was missing was duct tape.  Holding up my mouse pad is a vintage case containing the pool 300mm lens that mostly collects dust as the wicked sharp 400 is the cats meow and long lens of choice. 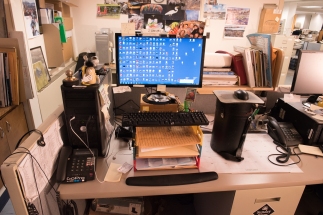 My wife has magical hands and is helping work out the last of the knots in my lower back.  She showed me a few new stretches and I am feeling tons better. 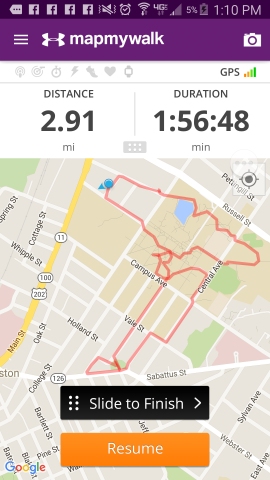 Took Allie for a long walk and recorded it with one of those new fangled apps that shows me just where I went and how long it took.  We lollygag quite a bit.  Lots to sniff you know, and a couple dogs barking in a window. 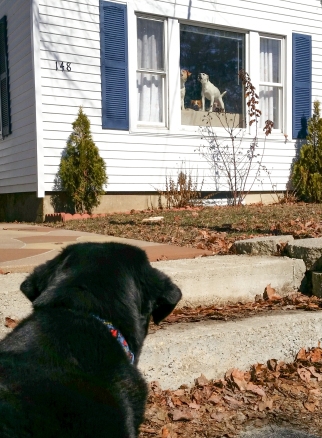 And lots to photograph. 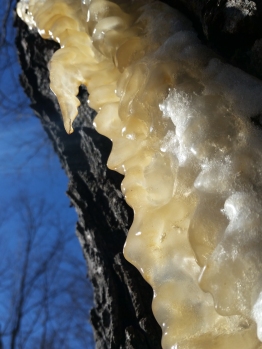 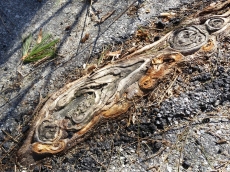 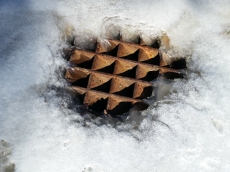 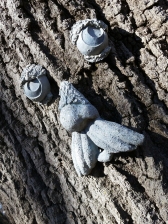 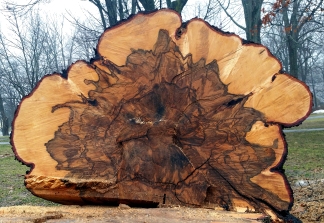 Intricate patterns from decay and disease inside an old Red Swamp Maple tree in the quad at Bates College in Lewiston waits for a truck from Whitney Tree Service to haul it away Thursday morning. Whitney owner David McDonald figured the tree to be about 150 years old, ” I’m just guessing without counting the rings.” The old tree was become a danger to pedestrians. It’s an ongoing battle with not only the elements, but a host of invasive beetles, moths, worms, and numerous other insects that can wipe out a species. They have been pruning dead branches, cabling large limbs together and doing whatever they can to maintain the health of a large variety of trees on the campus.

When I got back home this afternoon, I checked on the results of the Big 10 Championships that my son of a different mother…and father….was competing in.  After helping his relay team win yesterday, and qualifying as the top seed in the 800, the stage was set.  Isaiah Harris blew away the field on his way to a facility, Penn State and Big 10 record performance.  He opened some eyes today! How sweet it is.  Ann cried…..of course. Sky is the limit for him.  I hope to be BACK on track myself next week. 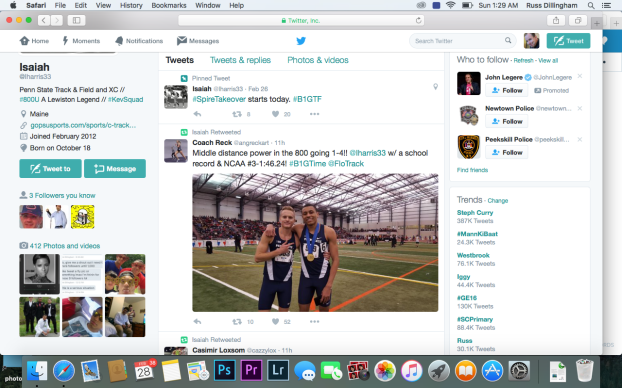