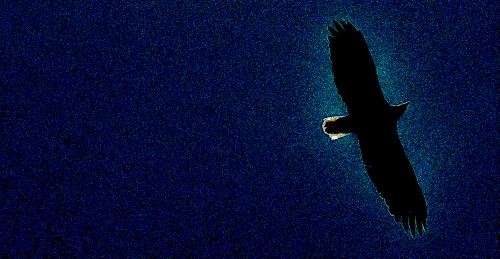 I was shooting families frolicking in Tripp Lake earlier this week.

We needed a feature photo as none of the stories the reporters were working on had potential for good art.  I spotted an eagle being chased off by smaller birds and pointed it out.  Two women with their children began talking about eagles, and how this one is always around.  He flew over and I took a photo.  I only had my zoom, so, without the 400 with the extension, it wouldn’t be good enough to publish.  When I was going through the photos, trying to figure out which cute kid photo was the best, I came across the eagle photo again.  I cropped it hard vertical, just as it would fit in our Facebook banner, but it still wasn’t good enough.  I then opened up the Levels in Photoshop and cranked the shadows and highlights to their maximum and created something really cool.  But it could never run in the newspaper, too much manipulation.  But it was a cool image and I wanted to share.  So I was going to post it to my facebook page, but I should have left hours earlier, so I logged off and went home to walk the dog and play Cinderella.  The day would have a happy ending as I ended up with my bride on the porch, IPA in hand.

When I came across the altered eagle image later in the week, today, I again pondered tossing it out on the web.  I played around with the levels again, and still wasn’t overly impressed,

but something tugged at me. I set aside the eagle idea and got to work on processing other assignments I didn’t get to earlier in the week.  While looking for a file photo for another story,  I again came across eagle photos I had shot in the past, and said, “it’s not throwback Thursday, but let’s make it Eagle Saturday.”  What? I might by flying off the handle here.  It might be a soar spot for you, or you might think I have flown the coup, but I am on a wing and a prayer that people might flock to my blog if I post more often.  Perhaps I am just a little flighty and my head is in the clouds, but I’m gonna leave the nest and flap my wings with this blog thing. 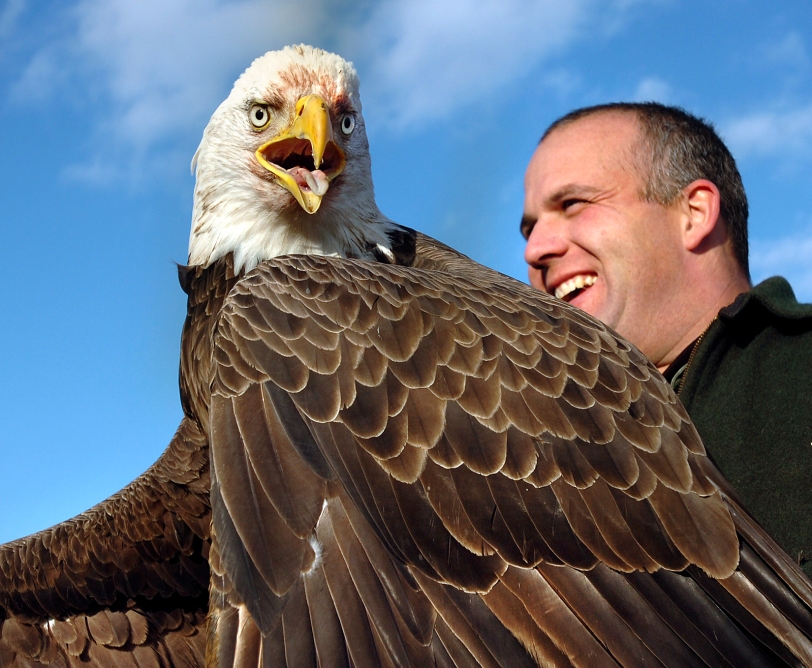 Russ Dillingham/Sun Journal
State game warden Dave Chabot is all smiles as he waits for wildlife rehabilitator Sheri Gee to come transport this mature bald eagle to the Avian Haven in Freedom. The bird was caught in a trap that was legally set in a field off Church Street in Leeds Tuesday afternoon. Bob Scott from Leeds was watching eagles feed on the deer carcas from his home next to the field when he noticed this one was stuck on something. He called Chabot who responded and discovered that the trap had done just what it was designed to do, trap animals of prey. The trap was set for coyote and fox, but it is not uncommon for birds to also fall victim of the device that is designed to clamp around the paws or toe of an animal of prey. As is usually the case, the bird was only caught on the talons and appeared to be unharmed. 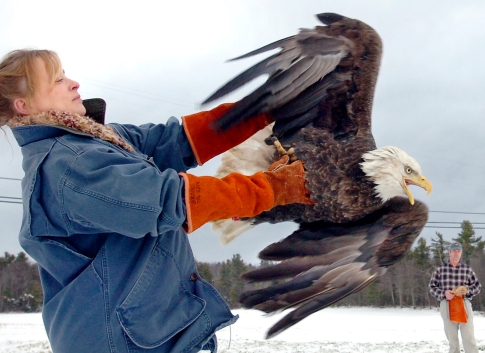 Wildlife Rehabilitator Sherri Gee releases this adult male bald eagle back into the wild Saturday afternoon in a field near where it was accidentally trapped on Tuesday in Leeds, Maine. A neighbor to the field spotted the eagle in distress and called a game warden. After it was freed from the trap, it was taken to Avian Haven in Freedom, Maine where it was checked over and given a clean bill of health. In the background is Charlie Todd from the Maine Department of Inland Fisheries & Wildlife who transported the bird from Avian Haven. 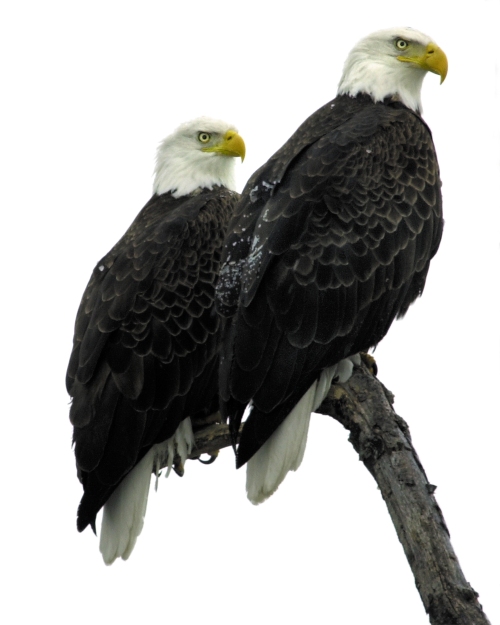 A pair of bald eagles wait out a driving, freezing rain on a branch overhanging the Androscoggin River next to Gulf Island Dam in Lewiston. 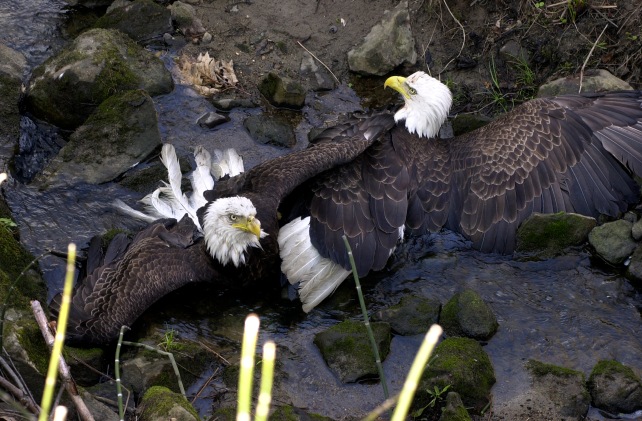 Someone driving on River Road in Auburn noticed a pair of eagles fighting in the air. They locked talons and cartwheeled to the ground. They stopped and found the pair, locked in a death grip in the middle of a stream. They called police, who called a wildlife expert. They arrived just after I did and took a towel and threw it over them. Just before the towel landed, they broke apart and flew/hopped away. They stared each other down and dried their wings for another 15 minutes before flying off in different directions. It was surmised that the older male was defending his territory from a young intruder.

A bald eagle soars over the Androscoggin River between Lewiston and Auburn as Tuesday afternoon’s strong wind unfurls the American Flag in Bonney Park in Auburn.