Over the 30 years I have been a photographer, journalist, photojournalist, and now, visual journalist……I love most every day I  work.  One day last week was not one of them.  A young boy was accidentally run over by his father and killed.  I was sent to interview his family.  What can you say, what questions are there to ask?  To point a camera at them all the while is my job.

The family knows they need to let people see Nathan one last time.  To remember his personality and spirit, but I don’t feel right.  They really don’t want to talk, to have us invade their time of mourning.  It’s almost a necessary evil for us and them to do what is best in this tragic, horrible, gut wrenching situation.  I did not know Nathan Capponi, but I cried for him and his family.  Very unprofessional perhaps, but I am only human.

I had big plans to blog, tweet, facebook and be a multi-media man a few years ago.  I had all this emerging technology, and I vowed to use it all.  Today, I use facebook a little, tweeted a couple two three times,  and blogged out a few dozen.   I do update  the Sun Journal website nearly every day I work with photos, video’s and breaking news as well as sports, feature photos and the beauty of Maine.  But I have not totally embraced the world wide web and all its assets.  My excuse is that I concentrate on what I do well, do it a lot, and add new stuff in bits and bytes and learn as I go.

Sunday was the heart pounding day.  I was one of the first through the doors of the sap house at Black Acres Farm in Wilton.  It was Maple Syrup Sunday and it was a quick in and out.

I really wanted to take the time and do a cool video, but I needed to be at the start of a race at Sugarloaf at 10:00.  I wanted to find somebody to wear my GoPro on their helmet.  The photo below that ran on the front page turned out pretty good I thought.  On Monday I got a call from his mom wanting to get a print and to tell me how cool it was that it was his birthday.  She was so excited!  I made her day, and most likely her son’s.

Belator MMA will certainly be back to the Androscoggin Bank Colisee for another televised fight for sure.  The fans came in droves and they were rowdy and loud.  It had to be mentioned in the story the next day that the building is most noted for the most famous short fight between Cassius Clay and Sonny Liston.

Several fights were over in less than 18 seconds.  It is a brutal sport and there is no shortage of blood.  It is not for the faint of heart.   None of our local fighters fared well.  The story was that Brent Dillingham had to shed nearly 15 pounds just before the fight to make-weight.  That and a tough opponent tapped him out.

If the blood and violence of the fight did not turn you away, how about an argument on gun laws and shows.  Is it right to be able to sell these guns?  Big guns, little guns, guns that shoot a lot.  Short ones, fat ones, ones that kill a lot.  Truth be told, guns are made to kill.  End of story.  With the amount of guns already on this planet, my belief, and I hope I don’t get in trouble for editorializing, but  a criminal will be able to get any type of gun he wants if he has the money and is determination.  The other 95% of law-abiding citizens of this great USofA will not be able to defend themselves. 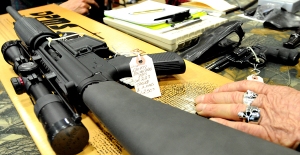 Cars were parked two blocks away and I struck up a conversation with a middle…to upper….aged guy also headed there and got to talking about the new laws.

He chuckled and said that in some states, the new laws restrict law enforcement to a limited number of  bullets they can carry.

Steve Lambert, left of Lewiston and Lauren Freitas of Auburn, work together to stop a shot by the opposing team during a friendly game of Goalball at the Hasty Memorial Armory in Auburn Saturday morning. The event was put on by the National Federation of the Blind of Maine, with instruction from Mark Sinclair from the New England Blind Athletes Association. The sport was designed for blind athletes, but anyone is incouraged to try it as everyone playing must wear eyeshades. For more information on upcoming events, including another day of goalball coming up May 25th, contact Patricia Estes at 783-0325.

Sunday was the last day of the season at Lost Valley.  I have skied, taken photos, and contemplated taking part in the pond skimming over the course of the past few years.  The below freezing temperatures this year, coupled with flashbacks of people plowing face first into the water, convinced me that it would be a working assignment with no chance of participation, even though it was my day off.  Call me crazy.

On the way over I thought about the ways I would use my GoPro.  I figured I would ask somebody to wear it, and remembered Tanner Dillingham, no relation, being one of the few, if only, one who managed to get all the way across last year.  I arrived just as the first person down was splashing across the man-made pond.  I got my gear out of the car and just as I set the equipment down, I heard Jodd Bowles, the effervscent MC,  talking about Tanner getting his skis on to head up for a run.  Serendipity.  I asked him, and he thanked me for asking him.  I said, “no, thank you.”   Although I did not actually participate in the event, I think I got as wet as many of those who did.  It was all fun and I was dressed for it, so all was good.  Click here to check out the video! 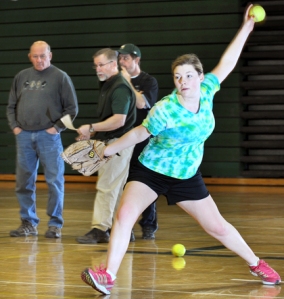 Coming back to the office from an assignment at Leavitt High School on the first day of spring sports practice, as usual, I took a different route than I came.  I attended a seminar a number of years ago where a well-known photojournalist gave a talk and said that he always took a different route back from an assignment to increase his opportunities to find interesting photos.  Unless he noticed something on the way there that might turn into something or was worth checking out again, he always took a different route to and from assignments.  I have always tried to follow that advice when possible, and quite often, had luck finding a cool “feature” or “enterprise” photo as they are called.  Monday was one of those days.  Instead of coming back down Route 4 through Auburn, I headed over the Androscoggin River and onto North River Road in Greene where I found this photo and a great story.  I thought that if there was not enough room to give it good play in the next day’s paper, I might turn it into a photo column.  There was a great story to go along with the photo.  As it turned out, it ran big on the front page and I was surprised that every word of my wicked long caption also ran.

Ray Gagne boils down some sap that he collected around his North River Road farmhouse in Greene Monday afternoon. “It went from summer back to winter and they pretty much stopped running. I’m just boiling down what I have left that was frozen before tomorrow’s storm. With the forecast, I hope to be back at it next week.” The retired retails sales representative came back to his roots instead of going the warmer climates like so many people told him to do. “I just love it here in Maine and have so much fun doing things like this. I did this when I was a kid, and now am doing it again just for fun. A couple years ago I drove past somebody doing it, and thought about doing it myself, so I pulled out this old stove we had and bought a stainless steel pan. I figured I’d tap 15-20 trees, but ended up with 40 the first year. I’m up to 125 this year. Last year I got 10 gallons that I share with friends and family.”

Murder in the park murdered

My photo column was murdered, I thought. Edited, chopped and the best parts ripped from the pages of the Sun Journal. I was told, it didn’t meet the Cheerios test and some of the words I used are never printed unless in extenuating circumstances. I was not surprised. In fact, I didn’t think it would fly in the first place.

I guess the edit helped and as it turned out, I have received more calls about the photo and column than I have about anything I have written in a long time. Funny how things like this come off. I work on some stories for days, even weeks, and they are often overlooked. What I think is an award winner turns out to be a snoozer.

Last Monday was my turn to write a photo column to run in Tuesday’s paper. I had some ideas all week that seemed to fizzle for one reason or another. I was scheduled to work the weekend, and there was not much going on, so I figured I could turn something around. I looked hard, worked a couple leads and made some connections, but nothing that could be turned around over the weekend. Sunday night I realized I would have to follow one of the leads I got over the weekend, and even though it was my day off, I had to get it done.

As I was walking out the door to go home, the crows, as they often do, were flying overhead. They usually are heading in a Northerly direction, but tonight it looked like they were heading to the park across the street. Within five minutes I had text for my photo column, and had to scramble to get the photo before it got too dark. Here is the first paragraph of the unedited version of my photo column.

A young couple walking arm and arm through Kennedy Park in Lewiston Sunday night was accosted, but managed to get away with just a stain on the young man’s coat.  It was a murder of crows that was the culprit, roosting in  trees as the sun settled into the horizon behind the skyline of Lewiston-Auburn.

“That was gross.” said the young girl not wanting to be identified.  When asked their names, the young man began to give his willingly, but his friend quickly interrupted with: “Are you kidding me.  If our friends read about us getting shit on in the newspaper, they’d laugh the (explicative) out loud.  Let’s get the hell out of here before we get crapped on again.”  she quipped as they flew off.  So, the incident will go down in the books as an undocumented attack on an unsuspecting person in a public park.